It's been a shorter weekend than it felt like.

Friday ended with the news of the massacre in New Zealand, with pointlessly unhelpful comments from Senator Anning, and with utterly predictable responses from the usual suspects of politics, media and entertainment.  May I predict the next few weeks?  The usual platitudes about thoughts and prayers (the last is annoying, coming from people who are unlikely ever to pray); some sort of reforms to New Zealand's gun laws; a few hackneyed editorials about toxic masculinity, and then finally back to normal in three weeks at the most.  The reaction is as clockwork as it was after the Port Arthur massacre, the killings in Aurora, Colorado and the Gillette razor commercial.  Yes, I do think all three can be grouped together, as can many other incidents great and small.  The world - or at any rate the West - has only one reaction available these days, and that is hysteria at the greatest volume possible.


As a result, when Saturday dawned I couldn't even be bothered getting out of bed and lay there until a little after 1000, which is unusual for me.  But, in the end I got my arse in gear and got up and went up the street for a 7/11 coffee.  My hair was such a straggly lank mess I covered it up with a cap and I made a mental note to get a haircut.  When I got back I set to work preparing a SMEACS briefing for the SES presence at the Festival today, of which more later.  My fairly ancient (10 year old!) laptop was struggling and had reached a point where I could type in a sentence, then go and get a glass of water, and then come back and see if the sentence I'd typed had appeared.  I struggled on for a while and then decided I was at the end of my tether and went down to JB Hi Fi and bought a new, modestly priced Lenovo.  I'm typing on it now and getting to like it more and more.  Oh yeah... and I got a haircut while I was about it. 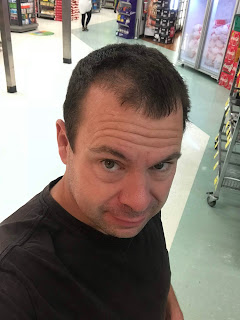 It was a beautiful day and I was tempted to go to the beach but couldn't fit it into the plan for the day.  I settled on a run instead.  Fifteen kilometres along the Capital City Trail, which I really didn't manage at all quickly and just had to slog through it.  Post run, I went to Mass at Our Lady's and then to do laundry (in the process of which, I stepped up the road for a beer).  I ended the day drinking with a few of the housemates on the patio.

Today was an early start to oversee the SES attendance at a Festival run by Banyule Council.  There's not much I really need to say about that.  The kiddies love the little Rescue truck and they especially loved Paddy Platypus.  It was a hot day and so there was a bit of willpower required to keep going and showing our best faces.


Festival completed I came back to my digs for to put on some civvies and go to the pub for a much-needed pint of IPA.  I must have been a bit dehydrated still as it hit me fairly hard and I opted to buy a couple of stubbies to go rather than try to drive home partly wasted.

And now? I'll finish this post and go for a shower and finish the copy of Spectator I bought the other week.  I still have the deep sense of lassitude I started the weekend with.  I suppose it's still the business in New Zealand and the dreary predictability of the aftermath that's getting me down.  I might take a mental health evening at the beach tomorrow after work.  I've never found a better preventative for one's troubles than drowning them in sweat or seawater.
Posted by Stephen at 04:32