Well played, Vinnies.  Well played.  I went to your op shop in Shepparton in November last year.  You charged me $3.00 for this book.  You got the best of the deal.

Joshua, The Man They Called Jesus is an attempt to write a secular biography of Jesus of Nazareth.  This is an interesting notion, but it requires an adept and perceptive historian.  Jones is neither.  He is an amateur historian whose 'expertise' was developed in writing about the Australian Light Horse of the Great War and about nineteenth-century criminal Ned Kelly.  These are undemanding topics beloved of Australia's amateur historians: the historical record is fairly limited, almost entirely in English, and the audience easily satisfied.  Unfortunately, this means that he is utterly out of his depth in writing about biblical history and theology. 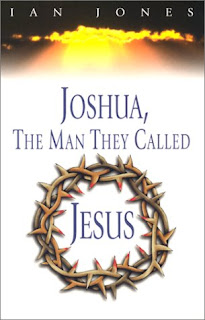 The book starts from the assumption that the life of one "Joshua" has been distorted by 'the church' to make him the Jesus revered by Christians as the literal Son of God.  Making this his starting assumption seems to have resulted in him not consulting any theological works.  Unsurprisingly, he then can't make a lot of sense of much of the Gospels (or much of the rest of the New Testament).  He attempts to cut through the resulting intellectual maze by taking a crude "true or false" approach to the Gospels in which only one description of events can be correct (e.g. p.266).  This is of course an absurd approach which no competent historian would take to any historical event (for example, would anyone writing about Australia's Federation debates insist that Edmund Barton's recollections must be disregarded entirely if they differ from that of Alfred Deakin?).  The other technique for shoe-horning the evidence into his predetermined pattern is by building assumption on assumption.  For instance, he makes no attempt to engage with the vexed question of whether Jesus of Nazareth had brothers.  He simply assumes that they were, and then builds a chain of further assumptions that they were also His disciples (p.48).  Any problems this approach creates are explained away with the speculation that the Gospels have been mistranslated or doctored.

This unconvincing body of argument isn't helped by being clad in simple errors.  A hypothesised 'pre-Gospel' text is said to be "codenamed Q" (p.2).  Naturally, this isn't a codename, but a scholarly shorthand for the German Quelle (source).  Other errors are simply bizarre: for example, Jones' belief that astrology - foretelling the future from the stars - is a scholarly discipline and a serious support for his arguments (p.12), or the claim that Gospellers Mark and Luke were Gentiles (p.259).  Even an undergraduate would know better than to claim his argument is supported by "respected scholars" without identifying them.

It will come as no surprise that Jones has a "profound disrespect for the forces that have distorted" the life of Jesus (on the dustjacket notes).  He seems to identify these forces as "the Church" without once identifying what he means.  Which church?  Catholic?  Orthodox?  Mormon?  Probably the Catholic Church, given that he accepts the crude equation of the Virgin Mary with a type of goddess, an argument memorably made by infamous anti-Catholic bigot Alexander Hislop.  In any case, it is clear he has avoided learning anything that the churches could have explained to him.  For instance, he claims that "Christians protest that their Jesus is speaking symbolically" with regard to eating His flesh and drinking His blood (pp.159-160).  This would no doubt come as a surprise to Catholics and Lutherans and other denominations which accept the Real Presence.  He also has trouble making sense of the agony in the Garden of Gethsemane, apparently believing that the 'Jesus of faith' should have been happy to go to his death (pp.218-9), suggesting he doesn't understand the full humanity of Christ (a basic grounding in theology would have been invaluable).

The most grievous theological balls-up comes when he describes as "appalling" the idea that Jesus/Joshua "should serve as a human sacrifice to atone for the sins of mankind", stating that "no Christian with any love and respect for God ... could imagine such a thing" (p.194). This failure to understand the most fundamental point of Christianity is inexcusable, and should have served as grounds for the publisher to reject the manuscript. When you're shown even less understanding of your subject matter than a Jack Chick cartoon, you've blown all of your credibility.
Posted by Stephen at 12:18 No comments:

The other day Nikki, who blogs over at From My Life to Our Life, did a reintroduction post.  It occurred to me that, since 2018 is shaping as a major reboot year for me (and because New Cîteaux was a bit quiet in 2017) that it'd be a good idea for me to do the same.

Where to start?  I'm Stephen, I'm 39 years of age, and I live in the Goulburn Valley, Australia.

I'm a long-distance dad to two adorable little girls called Grace and Rachel.  Their mother and I were married.  It didn't last (hence the past tense), but I remain on good terms with her, even if one couldn't really call us friends.  Why did the marriage fail? I guess there was enough blame to go round but I try not to think about it.  Regardless, she’s a good person and a wonderful mother on any measure.  She’s usually referred to in these pages as “The Ex”.

﻿
Work?  I was a lawyer once upon a time.  I moved up here from Melbourne in 2013 after an infamous week in January in which I was terminated from my job and served with divorce papers in the span of five days.  I worked for a year as a lawyer with a Shepparton firm, and another year as a legal officer with the water authority.  I've been a factory hand, a gardener’s labourer, a rouseabout, a fruit picker and a signmaker’s labourer.  Depressingly, I've also been unemployed a big whack of the time too.  Currently I'm hoping to hear back about an interview for a job earlier this month.

Actually, unemployed probably isn't the right word.  I seem to “work” a lot - a farm hand on the family place, for one thing.  A casual cleaner and gardener for a doctor in Shepparton.  An aspiring writer (strictly non-fiction; principally legal and technical subjects).  I also fill a hell of a lot of time in with volunteering.  I'm an emergency responder with the Victoria State Emergency Service and the Controller of the Tatura SES Unit (roughly the equivalent of a fire brigade captain).  I'm a member of the Shepparton Unit of the Red Cross Emergency Service, and a somewhat fanatical blood donor (my fortnightly plasma donation is one of the best bits of any given two weeks).

I love to run and keep fit.  This is kind of critical because I also like to eat way too much.  I've completed three full marathons but have given them up now (too hard on the knees).  I prefer the half-marathon distance because I can do so much more with it.

﻿
I'm a practising and committed Roman Catholic.  I loathe the dichotomy that people insist on claiming exists between the papacies of John Paul II and Benedict XVI on one hand and Francis on the other: each of them is a worthy expression of the same rich heritage.

Colossal "thank you" to my dear friend @wildchild176 who picked up the ideal First Communion gifts for Grace and Rachel: rosaries from the Vatican! Thank you so much!!
A post shared by Stephen Tuck (@sdtuc2) on Jan 5, 2018 at 2:59pm PST


If you're reading this and a blogger, why not reintroduce yourself as well?  And maybe share the link below for us all to learn to get to know each other a bit better!
Posted by Stephen at 19:14 1 comment:

The world never goes short of stories about things that don't go well.  I've just had a brush with very good corporate conduct and I thought it really deserved a mention.

Despite not having owned firearms for several years (medical issues) I remain a member of the National Rifle Association.  Last week I was flipping through the latest issue of American Rifleman when this ad for "Sneaky Pete Holsters" caught my eye for the wrong reason - 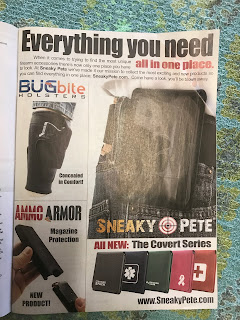 Sharp eyes will have spotted the concern.  One of the "covert series" holsters advertised features the Red Cross badge quite prominently.  It's not always well understood that the Red Cross image isn't a generic sign for medical help.  Essentially it is "[in] times of armed conflict ... the visible sign of the protection conferred by the Geneva Conventions on the victims and on those who come to their aid".  Use of the image is quite heavily restricted in order to maintain its protective status.  It struck me that this really couldn't be a proper use of the badge, particularly going on a firearms accoutrement.

I sent this email to the company -

I was interested to see your recent advertisement on page 7 of the December 2017 issue of American Rifleman.

I'm certainly a supporter of firearms rights, but I respectfully urge your company to consider redesigning this particular product.

A day or so later I received this reply -

Thanks very much for your feedback and getting this to our intention. We will change the layout of the cross for sure. Thanks again!

Reasonable people will have a range of views about firearm ownership in general and concealed carry in particular.  The same reasonable people would probably agree, however, that the humanitarian work of groups like Red Cross is immensely valuable.  "Sneaky Pete Holsters" is evidently willing to put itself out to ensure that that work is not undermined.  This is corporate citizenship that should be applauded.