I'm typing this on the evening of Good Friday after a dinner of fish and chips and a glass or two of wine.  I'm thinking about Holy Saturday, which is tomorrow.

It seems to me that Holy Saturday is a day that we don't value enough, sandwiched as it is between the anniversaries of the Crucifixion and the Resurrection.  But perhaps, it reflects an experience every believer has at some point, when one doesn't know what will happen next.

What happened on the first such day?  I'm knocking this off from something I seem to remember seeing on Facebook last year, but it's still sound.  On that day ...

Pilate prepared a report for the Emperor.

The Pharisees and Sadducees shook hands.

Barabbas puzzled over his luck.

Simon of Cyrene waited for his back to stop hurting.

Joseph of Arimathea stared blankly out of a window.

And Mary wept and wept.

It was a day of waiting.
Posted by Stephen at 11:42 No comments:

Responding to Covid; or, Tetris in real life

Yesterday saw me finally lending a hand with Red Cross.  After being unable to help out with the response to the bushfires this year, I finally had a role to play in responding to Covid-19.

On Friday a call went out for Red Cross Emergency Services to do food deliveries to people in strict isolation.  It was a kind of "come as you are" operation: there were a few utes and delivery vans, but most people were in hatchbacks and sedans.  We were to pick up the deliveries at the Yarraville Foodbank and then head off, with delivery addresses to be sent after departure by SMS.  It was kind of a chaotic way of doing it, although in a way that was to be expected: the management team would have had no idea precisely what carrying capacity they were going to have at their disposal. Each household was to receive three 12kg boxes of food and a 7kg box of non-food supplies (soap, that sort of thing).  Each set of boxes was a "pack".  With a certain amount of playing-Tetris-in-real-life I managed to get four packs into my little Pulsar. 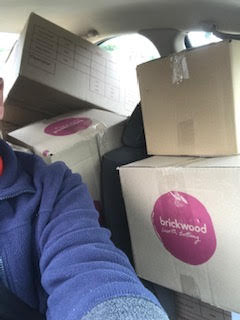 This came to 172kgs (in addition to which I also had my SES kitbag and some packs of papers).  I reasoned that the weight was still less than having four fully grown adults in the car and therefore it'd still be OK.  I might say that the degree the car sank down on its suspension (without even having my 85kgs on board) still didn't fill me with confidence! 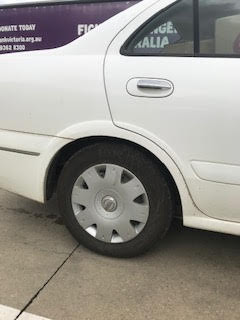 I was told my destinations would be in the area of Warragul and Traralgon so I headed off down the Princes Highway in the general direction of Warragul.  Driving was interesting:  I was conscious of the extra weight and the long climb up the Westgate Bridge saw me flicking back through the gearbox.  The rain came and went all day and so I kept the speed down, what with driving a heavily loaded vehicle on wet roads.  I got as far as Officer when I was told to divert to Hastings, to make deliveries there and then at Tootgarook.  With a bit of grumbling over the geography of it all I stopped to get fuel and also food (thank you KFC!). 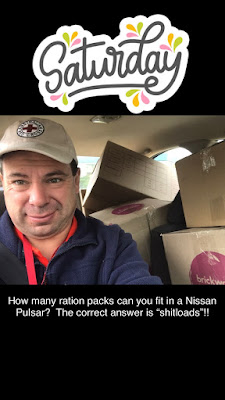 I got to Hastings about 2:30 and made the first drop off.  Direct interaction with the clients was (obviously) forbidden: the front door stayed closed while we dropped off the boxes and then called to say they could collect them.  By this point my phone had gone flat and so I found the St Vincents op shop and borrowed a power point for half an hour to put some juice back in it. 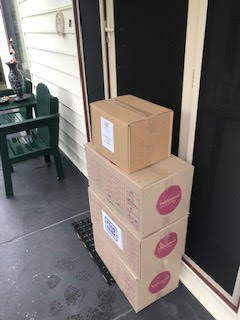 I made my second delivery in Hastings and then headed for Tootgarook, on the other side of the Mornington Peninsula.  This took me past the home I lived in as a child so of course I swung by to have a look at it.  The house is still there, repainted but the same.  It was a strange feeling, but it felt kind of good to know another family were there now.  It was a good house, and a good life.  Naturally I forgot to take a photo! 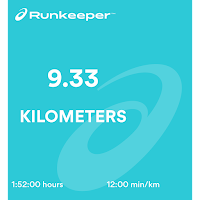 I made the dropoff at Tootgarook about 4:15.  I'd hoped to get a coffee and sit and look at Port Phillip Bay for a bit, but by then it was raining again in earnest and I said the Hell with it and drove home.  By the time I got there it was bitterly cold and certainly not running weather and so instead I went on a good long walk.  Most of the many restaurants in the area are now operating purely as takeaways and I decided I'd earned a pizza.  Da Peppe in Brunswick obliged (there's no photo: I was too hungry for it to last long!)

So there you have it: Saturday had everything.  It had a bit of community service.  It had miles.  It had pizza.  That's enough for any day.
Posted by Stephen at 07:17 1 comment: