It's been rather a full Saturday here: yet another where (as with most weekends I'm on my own) I've had the day planned out to the half hour.

I wasn't in a hurry to be out of bed (about 9am) and headed straight up to the laundromat to knock over the week's laundry while I could still get a parking space.  While the clothes were washing I went and got groceries at the nearest supermarket in walking distance.  Morning coffee was from the delightfully named Small Axe Kitchen.

I was back at my digs by about 11:30 am and since I was a bit ahead of schedule, did the ironing while listening to a podcast.   It was a beautiful sunny day and so I went round to the park to meditate using the "Calm" app.  The wind had dropped by then and so I headed out for a run, which was positively heavenly, save for my shoes being utterly clapped out (seriously: I can put my finger through the heel on one).  My time was a little less than I'd like but still rewarding after the winter slowdown. 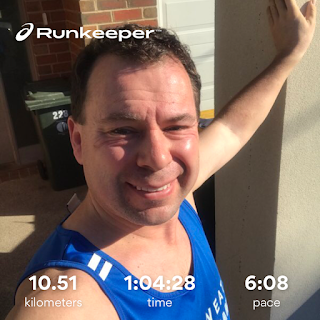 By about 4pm it was time for a beer and I went for a pale ale at the Railway Hotel with this week's issue of CW.  Some peace and quiet in the beer garden was good if a little chilly. 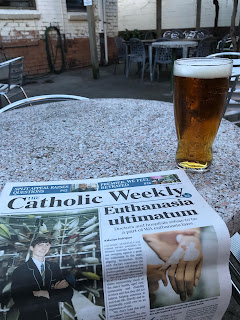 From the pub, I went up to Our Lady's for confession and Mass.  There's a young priest there which is a bit of a novelty: a fellow in his late 30s.  Certainly it seems different from the greyheads who are so many of the priesthood!

And now, back at the sigs.  I've done the preparation for this week's SES training and had dinner, so it's surely bedtime.  Bed feels good already!
Posted by Stephen at 06:31 No comments:

I'm typing this in a pub in North Carlton on my way home on Friday night.  I'm very much of a mood to count my blessings.  I'm struck by how many good things there are in my life.  Surprisingly, for a Billy No Mates like me, one of the best things is the people.

I love knowing people who have a passion. Right now I have them in spades.

There’s Gen, who used to be a legal secretary at work and who loves cheerleading.  She blogs about it here.  Her instafeed is a blaze of cheer images.  I know next to nothing about cheerleading, but her passion for her sport was and is infectious.


As amazing as travelling and being on holiday is, I really can’t wait to come home and see my girls this weekend 😍❤️💚 . . . . . . . #ladyreign #family #allgirl #io5 #sxmh #scc #southerncrosscheer #cheerleader #cheerleading #love #pyramidgoals #worlds #worldswednesday #suspicious
A post shared by Gen Clark (@gen_clark) on May 21, 2019 at 1:18pm PDT

Then there’s Sarah.  Sarah’s a remarkably talented lawyer, but she lives for the stage.  When you talk to her about acting, you can sense the passion for her craft. You can hear the enthusiasm for getting the most out of every role she takes on.

There’s another person I know only as Miss Cosmopolita. She’s launched a line of swimwear that she now trying to get off the ground as a business.  There’s not much point me taking a prurient interest in her work and so I don’t.  I love the passion she has for creating beautiful things.


Part 1. What is the story behind my @misscosmopolita_swim brand? How did I come up with the idea of bikini-transformer? . Originally there was a spark. Something I ciuldn't really comprehend. It was during our travels in Barcelona. @ivan_aus and I were walking and thinking about what to do with our lives. . . I had to describe to him the idea, but it was so vague. I couldn't figure it out. . Then, it came back to me again during my dream. I couldn't sleep that night. I was thinking about designs, colours, shapes, the messages, slogans. . . I couldn't wait for Ivan to wake up! I soo wanted to tell him what I came up with!! I had a vivid plan!! . to be continued...
A post shared by INNA. BIKINI-TRANSFORMER (@misscosmopolita) on Aug 19, 2019 at 9:48pm PDT


There’s Nat.  Nat was a personal injuries lawyer.  She threw it in to move to London and become a flight attendant (her picture settings don't let me share any here, which is a shame).  You can’t help but love her rebellion against the ordinary life, and it challenges the rest of us to ask: are we living our own best life?

Then there’s Nikki.  Nikki is a devout Christian who lives her faith with a passion and generosity that couldn’t help but draw people.    I can’t think of a better way of evangelising.  What was it St Francis supposedly said? “Preach all the time; if necessary”, use words” (again, no images I'm afraid).

Me? Long time readers will know that I’m pretty sure what I’m doing now is my vocation.  I don’t think I could be anything but an injury lawyer: this is what I was called to be, at least in this season of my life.  Being anything else would be a lie and a cheat.  I hope - very much - that I can emulate the drive that my friends have.

Are you living with passion?  Are you doing what you were called to do?

Turn your mind to it. Life shouldn’t be lived in third-gear.
Posted by Stephen at 08:11 No comments: