Feeling much more positive about the world this afternoon.  Never underestimate the power of a quick hit of dopamine! 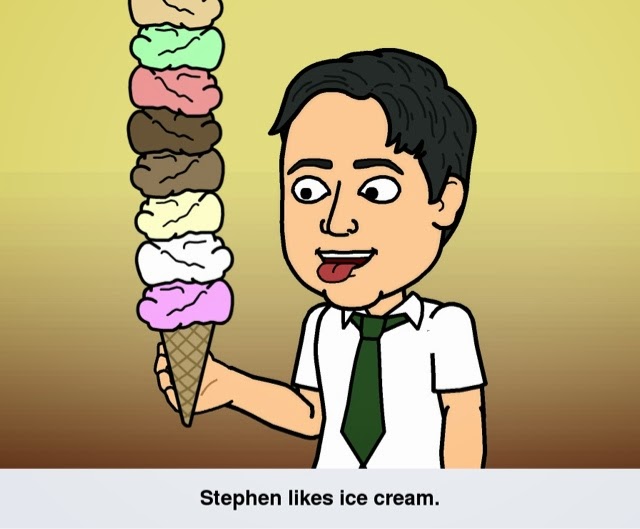 Hi everyone,
So here I am trying to persuade myself to do something useful with Saturday.  I'm feeling absolutely flat as Hell after last night.  The last time I felt like this was after the utter débâcle of the Independence Day dinner of 2010 - a weekend long nightmare of stress, having people over and having one of the worst fights ever with Joni.
It's not like I'm short of stuff to do.  I promised a contact an article on the Jones Act.  I have another piece to prepare on the Act of God defence in tort law. And I have study to do.  And right now I can't even make myself get off the couch.  Even the thought of going for a run makes me wilt.
Epically not much fun right now, I'm afraid.
Posted by Stephen at 16:36 No comments:

Hi everyone,
Typing this to download after yesterday.  It's a little before 6am on Saturday morning.
Last night was the local Law Association's Christmas dinner. I really didn't want to go, but being on a limited contract I decided I needed to bite the bullet and go press the flesh in case I'm banging in doors in 6 months looking for work.
So, this was the venue: 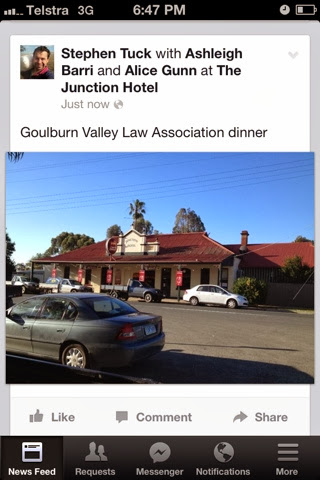 It was probably a bad sign when I could smell beer before I was even through the door of the place.  Anyway, the pre dinner drinks were in the bar of the hotel with the regulars - mostly farmers and shearers it seemed.  Suffice it to say that I felt more than a little self conscious ordering the house red and wondered if someone was going to storm over and question my manhood. 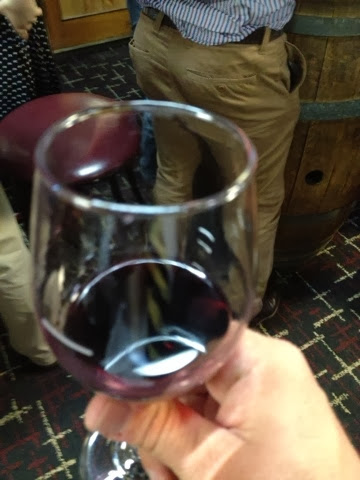 Frankly, I should have stuck to beer anyway.  I'm not sure how long the bottle of wine involved had been sitting around, but it had clearly been a while.  Certainly a few more hours were all that stood between it being wine and it being vinegar.
Anyway, as is my wont I let people come to me and when they did, let them talk about themselves (as that's most people's favourite subject).  I met a couple of people that way, but inevitably I also had to explain why I'd come from Melbourne to Shepparton.  This was when I found something useful about my fellow legal practitioners up here.
They cannot take a fucking hint.
When someone is plainly skirting questions about their family arrangements and the like, don't keep fucking asking about them.  And when the slightly-less-evasive answers include the words divorce, broke and homeless, change the fucking subject.
Things didn't get a whole lot better when we moved onto the 'dinner' phase of the evening.  In fact, they got worse.
I found myself at the end of the table surrounded by dyed-in-the-wool Liberal Party members who wanted to talk about  politics ad infinitum.  I was less than comfortable at this point.  Remember how I said they couldn't take a hint? Well - 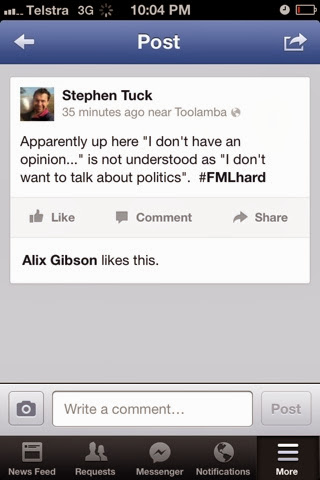 I made one exception when one young fellow who aspires to be the next Liberal candidate for the seat of Murray began to  hold forth on how the French support their farmers.
Unfortunately, I was sitting next to what I gathered was a semi-retired lawyer from another firm who also seemed to have gone through law school before they included a subject on not being a dickhead.  What do I mean?  This is what I mean - 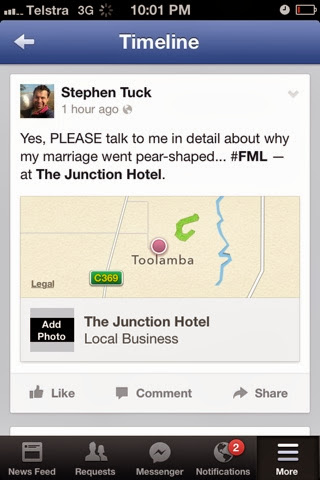 And then this gem...
"So you're divorced ...  Now you're up here you must be looking for a new wife..."
Attempts to change the subject met with limited success.
Incidentally, the food didn't make up for the evening.  For one thing, the chef confused the notion of a "rare steak" with a "medium-well done" steak.  I'm not sure what you got if you asked for well done, but I suspect it would have been charcoal.  On the plus side the wine improved once they opened a new bottle.
By a little after 10pm it was clear there was nothing for me there in terms of conversation or meeting people (Or coffee. Or dessert.) and so I put on my jacket and left. 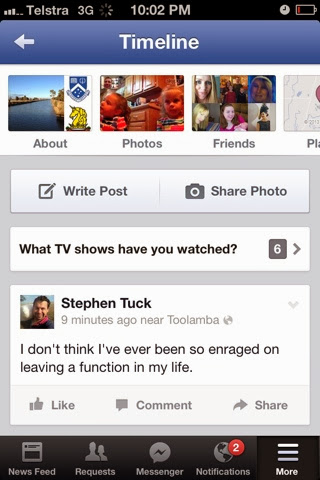 Lying here typing this the morning after, I'm still unhappy and also ... I dunno. Disappointed?  I suppose that word will do. At some level I guess I'd been starting to think 'life is actually pretty satisfying up here ... I could get used to being a country lawyer ... Maybe this is a place to begin again..."  Clearly I was wrong.  I don't fit in here.  I don't belong here and never will.
Posted by Stephen at 13:02 No comments:

Hi everyone,
Short post just before I get up to do some strength-work before breakfast.  I just woke up from the weirdest set of dreams in ages (having a major freak out while working as a window washer on Bourke Place or the Rialto, both being buildings I used to work in.  Kind of odd as I've never had a problem with heights.  Anyway, maybe it's a metaphor, maybe it's my brain telling me it doesn't care for these Prosomnia pills.  I think I'm fine either way.
Work is good, although I'm a bit annoyed with my performance this last few weeks.  My brain doesn't seem to want to get out of second gear.  On the plus side, more people are coming through the door, so there seems to be more work about.
Time to get up I guess, and face the day.  More later.
Posted by Stephen at 12:17 No comments: