A kind of horror

I haven't blogged in ages, it feels.  In part that's been due to work: the boss has been away and every weekend I've been committed with either volunteering or the farm.  I'll spare you a diary post because they're always kinda boring and just an excuse for a bunch of photos.  What's really news?  Well, I fell off the semi-monastic bandwagon the other week after a major case eventually fell over.  Both I and my assistant felt a bit flat after that as we'd become fond of the client and had thrown everything we could at the file until there were no cards left to play.  As a result, self respect has taken a bit of a beating lately.  And I've become fond of praying as much as I can of the liturgy of the hours.

And what a crappy time to chose to fall down on the job.  A recent case in the Court of Appeal was a good example of the contagious deterioration of our age.  In Best v The Queen [2019] VSCA 124 the Court noted that -

In early July 2017, the victim ... Samantha Hurst, met the applicant through mutual friends. At an early stage during the relationship, Samantha told the applicant that she was 13 years of age.

The applicant and Samantha engaged in sexual intercourse about one week after they first met. Thereafter, they would meet together three or four times each week. During the period of their relationship, they engaged in sexual intercourse on approximately thirty occasions, which occurred both at the applicant’s home and in his vehicle. That conduct constituted the offence that was the subject of charge.

On 18 August 2017, Samantha attended the Ballarat Community Health Centre. She undertook a pregnancy test that was positive. Subsequently, she gave birth to a baby boy who she has raised with the assistance of her mother. On 23 August 2017, the applicant was arrested and interviewed for the offences that related to Samantha Hurst. During the interview, he admitted having sex with Samantha. When he was asked how old she was, he said ’14, 13 maybe, I’m not sure’. When asked whether he was aware that it was illegal to have had sex with Samantha, he said ‘It’s not right’.

On 6 May 2014 the appellant gave birth to the complainant’s child.

And then this weekend, the following piece of human garbage showed up in my Twitterfeed - 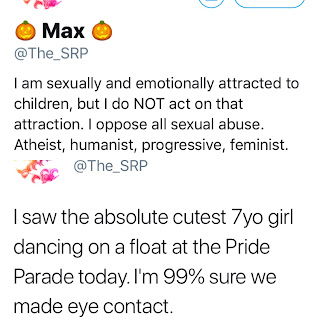 I find myself sitting here in a state of dumb despair that the world has seemingly come to this, where even the gravest of crimes, and even of defective behaviours, are held to no higher standard than that of the criminal law.  The law is, of course, to be obeyed.  But shouldn't people, somehow, be restrained by the thought that something is not just a criminal offence, but profoundly immoral?

I don't have any easy answers, but I think a world that reduces all morality to "love is love" has gone profoundly astray.  As the author of 2 Peter 2:18-19 says -


For, talking empty bombast, they seduce with licentious desires of the flesh those who have barely escaped from people who live in error. They promise them freedom, though they themselves are slaves of corruption, for a person is a slave of whatever overcomes him.

Surely people are better than Mr Best and Ms Gillespie?  Or are they Everyman with better (or at least different) opportunities.  I don't know.  But I feel a kind of horror at the world being inflicted on my daughters.  I just wish I knew how to make it a better place for them.
Posted by Stephen at 04:33 No comments: