You never realise how boring you are until you have spare time to fill in.

I'm writing this early on a Sunday afternoon.  I was hoping to facetime with Grace and Rachel, but that's fallen through as they're staying with their uncle tonight.  As they're otherwise engaged I'm at a bit of a loose end in the time I'd set aside.

I've used this weekend to rejuvenate myself a bit: I've been feeling very blah mentally at work and so this weekend has been an attempt to get my perspective back.  I started yesterday with my Red Cross phone calls (all clients well) and then drove out to Rowville to see a client about some paperwork.  I was back in Melbourne by about 1pm.

The weather was depressing and so the best place I could think of to go and apply some mental Dencorub was the National Gallery.  They currently have a stunning exhibition of Venetian glass titled "Liquid Light".  I love the frozen perfection of these pieces: like music had been made solid. 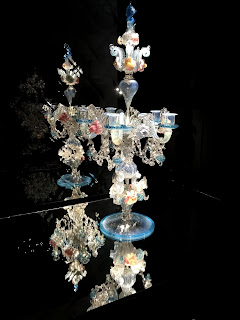 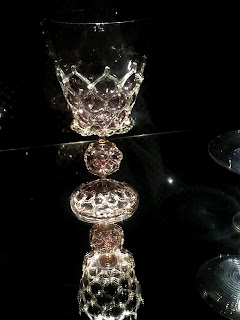 That said, I found myself imagining funny captions for the mosaic of the Last Supper.  It's masterfully done although Judas looks like he's about to start breakdancing.

From there I went off to St Mary Star of the Sea church in West Melbourne.  It's one of the most beautiful churches in Victoria.  I don't often go there was it's a bit out of my way, but every time I do I'm glad of it.  I attended confession and set into a meditative Rosary which I'd just finished when Mass began. 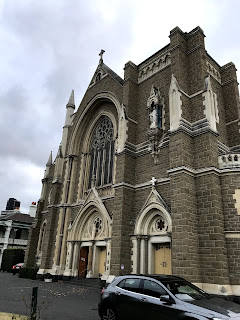 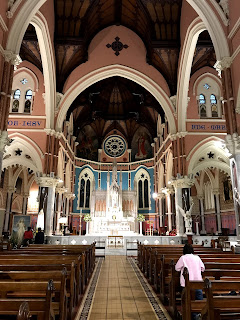 Quite a long homily from the priest which made the interesting point that "Doubting Thomas" might be thought of as a type of skeptic, demanding evidence rather than taking things on faith.  To that extent, by being persuaded by what he saw himself, perhaps he was not so different to the laity who were drawn to the disciples' healing work in Acts or John of Patmos watching and recording what he was shown in Revelation.

I should add that partway through the service I noted that the paintings of the saints included one of Thomas More, the patron of lawyers.  It seemed I was on the right track! 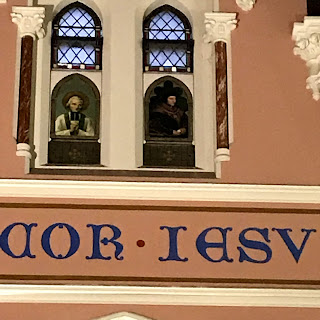 This morning was an early start, getting down to the Albert Park Lake for the Angela Taylor Memorial Walk/Run.  This Race is over 5 or 10 kilometres and is run by the Victoria Police Blue Ribbon Foundation in honour of Constable Taylor, who was murdered in the Russell Street Bombing. Conditions were pretty well perfect - cloudy and cool, with about a thousand entrants!


I got together with the SES team and we headed out.  I was on the 10km course.  This is shorter than my usual race distance and so I really hammered it with a sprint at the end.  I finished in a time of 50m32s which is just shy of a PB for me.  Outside of medal contention but it still left me pretty happy.

Which brings me to now, back at my digs.  I've had a kind of chicken/Greek salad for lunch and I think it might be time for a little guided meditation and maybe some yoga: pace Fr Flader, I'm not persuaded either practice poses as much of a threat to my soul as burnout does to my mental health or lactic acid to my muscles.

How's your weekend?
Posted by Stephen at 21:42 No comments:

I finally have a chance to look back on the season leading up to Easter.

I was determined to make Lent count this year.  I'd been feeling myself drifting a little.  The penitential season begins by reducing you to nothing - the key phrase of Ash Wednesday is "you are dust and to dust you shall return".  By extension, it is a time where you can rebuild yourself from nothingness.

I had decided to use the season for a real challenge: to purge myself of impure thoughts and deeds for the 40+ days of Lent.  This was fortified by getting to Mass at least twice a week and attending confession once a week.  I chose to keep a Lenten diary which would be separate from my day to day diary.  Reviewing it has been instructive.


The first thing I noticed was how excited I was to be able to receive the Eucharist again.  Long time readers may recall that I had been self-excluding from communion for a year or more.  That is, I expected to fall into the sin of adultery.  Hence, no absolution and therefore no communion.  Being able to receive it again felt incredibly special.  Specifically, I felt like I really WAS part of the family again.  I think I caught an echo of what the Prodigal Son must have felt when his father welcomed him home.  If I had gained nothing else from Lent, this would have been enough.


It was, however, not the only thing I gained.  Another insight I found was how much sin, at least, where fleshly desires are concerned, stems from boredom or having unused spare time (or both).  Certainly, it was in idle moments that I found myself most sorely tempted.  On the other hand, on quite a few days my Lenten diary read "too busy to sin!" when I'd been fully occupied at work or otherwise.  In one of my Dad's favourite phrases: "an idle mind is the Devil's workshop".  And when nothing else worked, the intercession of St Agnes and St Maria Goretti never once failed me.


But wait: there's more.  Making this commitment to keep fleshly desire under control gave me an utterly unexpected clarity about my (not entirely voluntary) celibacy.  For one thing, after the first few days, I realised how freeing it was not to be under the dominion of my own body.  I realised how much safer I felt with my brain, rather than my instincts, in charge.  In the last few weeks, I came to realise how little I'd ever actually enjoyed "fleshly pursuits".  And on 17 April, I began to wonder if I might, in fact, be one of these people (this last is a good deal less interesting than it might otherwise be, given my state in life: practically, it is about as interesting as learning one has A+ type blood).

Finally, I think that at some level this feeling of committment made it possible for me to look at the tragic burning of Notre Dame cathedral with less pain than I might have otherwise had.  It is, indeed, a tragic and shattering loss, but I also found myself thinking: this is our chance to build something even more to the glory of God.

Some denominations spurn observing Lent.  This is a pity.  I can say from experience that setting yourself this challenge has brought blessings I never even knew I wanted.
Posted by Stephen at 02:42 No comments:

Easter has finished hard.  There's the terrible bombing in Sri Lanka, for one thing, but also a tragedy closer to home: yesterday two SES members from the Port Campbell unit, who were also volunteers with Surf Life Saving Victoria, drowned while conducting a rescue at sea.  A third member of both organisations was badly hurt.


This terrible accident will hit SLSV and Port Campbell SES hard.  The SES volunteers I know seem to be feeling grieved by it - even ones like me with no connection to the Unit.

I could dress it all up in flowery words, but I don't think they'd add anything.  People have lost husbands and partners, brothers and fathers, co-workers and mates.  It's a terrible thing and that's all you can say.
Posted by Stephen at 07:04 No comments: