When you’re dead, they’re supposed to leave you alone aren’t they?  And he was more than just dead.  He was a figment of a forger’s imagination.  And he’d been enjoying slipping into ever darker obscurity.  But then some bastard of a writer had yanked him back into existence, given him a map, a guidebook, a bicycle and a pair of Nikes and then stood back to watch the fun. 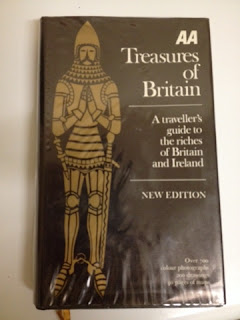 
Sir John de Mandeville looked grumpily at the North Sea and checked the map again.  John o’Groats to Lands End on foot and by bicycle, with a travelogue on the way.  And his speed would be controlled by what his author managed to run, walk or cycle in reality.  Why a writer should choose such a convoluted way of framing a story was anyone’s guess, he thought.  Still, he couldn’t complain too loudly.  He only existed at all because a fourteenth-century writer had prepared his own pastiche travelogue and attached the name “Sir John de Mandeville” to it.  He owed his life to dodgy authorial choices.  Now it was time to pay.
He wasn’t at all certain about his travelling companion.  He found he'd been paired with Nostradamus.  This wasn't the worst match that could have been handed to him.  For one thing, the man knew how to treat the plague (possibly useful, possibly not).  For another thing, he was usually thought to be able to foresee the future (Mandeville had some doubts on this score).  By comparison, Dante had a reputation as a difficult travelling companion:


Nevertheless, Nostradamus had his drawbacks.  He tended to spend a lot of time staring off into the distance.  He also seemed to find it impossible to answer a question in anything less than a four-line verse of dubious meaning.  Mandeville expected to find this immensely annoying very soon.  Still, he had another go.

"Hey Nostradamus - do you want to run or cycle for this first leg?  We'll have to take it in turns
"When the fish that travels over both land and sea / is cast up on to the shore by a great wave, / its shape foreign, smooth and frightful. / From the sea the enemies soon reach the walls." **
"Yeah, you're going to be running".

John o'Groats wasn't the worst place to set out from, at least.  The town itself was unremarkable; if it hadn't been the northernmost inhabited part of Britain, it would have been even forgettable.  The suspiciously convenient yPhone he had been given told him that -


In 2005, a popular tourist guide, Lonely Planet, described the village as a "seedy tourist trap" and in 2010 John o' Groats received a Carbuncle Award from Urban Realm magazine for being "Scotland's most dismal town".


Although this information came from Wikipedia, which he was finding was as reliable (and compiled in much the same way) as the travelogue to which he owed his existence in the first place.
Over Nostradamus' complaints, Mandeville detoured them to the first Point Of Interest the guidebook suggested in the vicinity, a broch (Iron Age fort) at Skirza.  The guidebook advised -

Standing on a narrow spur of cliff above the sea, the approach to the broch from the main cliff-top is protected by a wide ditch.  There is a wall, very thick in proportion to the enclosed space, the one being 14 feet thick and the other some 22 feet across.  The entrance is on the seaward side of the building and there is some evidence of minor additional structures.  It is an Iron Age dwelling***

The broch looked its vast age: somewhat dilapidated, somewhat worn, and yet timeless.  The stones and earth and grasses had a sense of waiting about them.  They expected the tough, durable men who made them to return and seek protection.  The pyramids had no greater craving for the future.
"You look into eternity, Nostradamus.  Nothing to say to these ancient stones?"
"A scythe joined with a pond in Sagittarius / at its highest ascendant. / Plague, famine, death from military hands; / the century approaches its renewal."**
"This place will be safe from the scythe then?" asked Mandeville, but the prophet said nothing.
"Time to go".
Mandeville wheeled the bicyle around.  The gears clanked as they began the first leg of the long journey south.
========================================
* "And to the captain, Jean Riou
as much for him as for his archers
I give the meat from six wolves heads
(which is no food for swine-herds),
snatched from butchers' dogs
and cooked in lousy sour wine.
For tasty morsels such as these
a man would go to any lengths"
François Villon, 'Le Testament' (trans. A. Bonner), in The Complete Works of François Villon (Bantam: New York, 1960), p.81.
** From http://www.crystalinks.com/quatrainscentury1.html.
*** Automobile Association, Treasures of Britain (Drive Publications:London, 1976), pp. 433-4
Posted by Stephen at 04:34