Christopher Knight and Robert Lomas, The Second Messiah (Century Books: London, 1997)
Some while ago I wrote a fairly cranky review of Erich von Daniken’s Chariots of the Gods.  I think I should apologise.  To Mr von Daniken.  He actually hasn’t written the worst piece of faux-scholarship I’ve ever seen.  That honour goes to Messrs Knight and Lomas for The Second Messiah: Templars, The Turin Shroud and the Great Secret of Freemasonry.
The authors basic hypothesis runs like this:  Jesus Christ was the child of a teenager called Mary who was sexually assaulted by a priest of the Jerusalem Temple.  Paul the Apostle misunderstood that Christ’s resurrection, which (the authors say) was a Jewish ritual and not an actual return from the dead.   As a result, Christianity developed into a strange set of ideas which Jesus would not recognise.  The priests of the Temple fled to Europe as refugees after the destruction of the Temple in 70AD.  There they established themselves as the “Rex Deus” families and, a thousand years later, conspired to launch the First Crusade, recapture Jerusalem from the Saracens, recover the scrolls and other knowledge buried under the site of the Temple, and found the order of the Knights Templar.  This order continued to exist after its suppression in 1307 (the image on the Shroud of Turin belongs to their final Grand Master, Jacques de Molay).  It morphed into modern Freemasonry, which has itself lost sight of the ancient knowledge it was meant to preserve.
I think it’ll tell you everything you need to know about this book that before I’d finished reading the first page, I’d already written “bollocks!” in the margin.  I repeated that word, and worse, for the next 244 pages.  In fact, the only pages that I didn’t write something like that on were the ones were I’d largely stopped reading and was just skimming with increasing annoyance.  Let’s speak plainly: the authors have not done even basic research into their subject.  They appear to be unaware of the scholarship surrounding how the New Testament came to exist (for example, they seem to believe that Mark’s gospel came into existence spontaneously, and don’t seem aware of the hypothesised “Q Source”.  They plainly know nothing at all about mediaeval spirituality (reading Norman Cantor’s landmark ‘The Crisis of Western Monasticism, 1050-1130’* and JH van Engen’s ‘The “Crisis of Cenobitism” Reconsidered’** would have done wonders, for instance).  Weirdly, they seem to think that a priest and a monk are the same thing (pp. 23 and 75), that canonization and beatification are identical (p. 40), and that the Celtic church denied the divinity of Christ (as, in the authors’ view, did some parts of Christianity(!) before the Council of Nicaea (pp. 70 and 199). 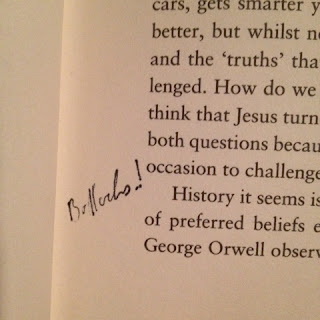 More exasperating, though, are the errors suggesting that not only did the authors do no research, but that nobody actually read the manuscript before it was published.  How else can one explain the baffling conflating of the Greek letter Tau (Τ) with the Hebrew letter Taw (ת), when the shape of the letter is critical to their argument (p. 41)?  Equally, how did nobody notice their bizarre claim that the serpent-and-rod symbol for medicine is the Rod of Asclepius from Greek mythology and not a symbol from the Jewish Essene sect (p. 213).
The entire “Rex Deus” argument is based on an account given to the authors of a story spontaneously told to another writer by “a distinguished [French]man of advancing years” who claimed to be a member of the Rex Deus family.  The Frenchman is never identified, although one wonders if it was the infamous fraudster andhoaxer Pierre Plantard (pp. 77-9 and 198-9).  The authors seem unfamiliar with the concepts of “hearsay”.  Or “lying”.  Or “bullshit”.
It would take a couple of pages to itemise the errors in the book, and I’m not going to do that.  It's simply not worth it.  The authors should perhaps not be condemned for writing drivel if the public was willing to buy it.  The publishers, however, should be strung up for aiding and abetting this exercise in historical negligence.
======================================
* (1960) 66 American Historical Review 46.
** (1986) 61 Speculum 269.
Posted by Stephen at 06:17