Adulthood, maple syrup, and the discovery of the supermarket

I don't think I truly discovered supermarkets until I was 24.  Of course, I'd been into them countless times as a child and as a young(er) adult.  The difference was, most of the things there were simply out of financial reach.  I grew up in a fairly average middle-class home; often money was rather tight.  This continued when I went to university and became a permanently short-of-cash student.  When shopping, everything had to be bought as cheaply as possible.  The heavy bias was to generic brand everything, and for quantity over quality (and indeed, over nutitional value). 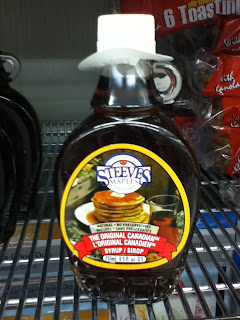 I only began to see things differently when I was 24 and finally entered the workforce as a articled clerk.  Clerks were never well paid (reputedly it was one of the lowest salaries in the entire job market), but to me $350.00 a week was a fortune.  It allowed me to explore some of the luxuries that the supermarket had to offer in addition to the usual ultra-cheap groceries I still bought.  And that lead me to maple syrup.  At that time I had just come to have a pen-pal in Canada (who is now one of my closest friends).  Maple syrup seemed to me the height of exotic.  It helped me feel a sense of an outside world.  Not, it should be added, a sense of the world opening up for me; just that of a few cracks of light opening in my shell.
I thought about this the other day when I saw a bottle of male syrup at Safeways (picture attached) on a rainy afternoon, like there were a lot of at that earlier time in my life.  Sometimes it's good to be reminded of how locked-away are the places you've allowed your mind to live.  How much you can long not to be trapped in them, and how easy it is to allow that locked-in place to become permanent, such that you don't notice it anymore.  And how exhilarating, frightening, rewarding and joyful it is when you step out of your cave, to broaden your horizons and begin to see if your dream is around that next bend.
Posted by Stephen at 06:42