It’s been a funny sort of a long weekend.

First, on the subject of it being a long weekend at all: one of the quirks of Victorian life is the Cup Day public holiday.  This is held to mark the running of the Melbourne Cup horse race.  If you’re like me and don’t care two pins about horse racing, there’s a vast temptation to take the Monday off and make a four day weekend and get out of the city.  All bar three people in the office did the same! Anyway, this was why I found myself leaving the office for the train to Shepparton on Friday evening.  After finishing my last hearing for the year last week I kind of felt I was due a strategically placed day off!

Even though I’d only been away a week, it felt oddly good to be back up there.  There was a faint sense in the air of holidays at Brocklesby when I was a kid.  There was a sense of possibility in the air that I don’t always feel these days and that I value more and more.


Dad and I had earmarked Saturday as the day to head down to the Lake GoldsmithSteam Rally, a festival of restored engines, tractors, trucks and motors if all sorts.  The day kicked off with feeding Polly the Calf and putting a roll of hay to the heifers before we got on the road at 9am.

The trip took a bit longer than planned (we got lost and somehow ended up at Clunes). It it was well worth the drive.  We both love old engines and there was no shortage of them to see.

Sunday brought more mundane activities: a good night’s sleep, feeding Polly and a good walk with the dog.  The high point of the day was of course FaceTime with Grace and Rachel.  This time, Rachel was especially chatty.  I love this because she’s usually the more quiet one.  Having the ability to spend time with my daughters this way isn’t what I’d expected being a dad to look like, but at least I get to BE a dad.  I just hope it’s enough for my darling daughters as well.
Sunday wrapped up with a run (just like old times!).  I’m down for the Portsea Half Marathon next weekend and so I had a decent distance in mind.  I settled on a run back over the ridge towards Miepoll.  Conditions were perfect with enough sun and cloud to keep you warm but not burnt.  My new runners are cheap but held up well.  A couple of moderate runs this week and maybe a barre class and I’ll be gold for the race. 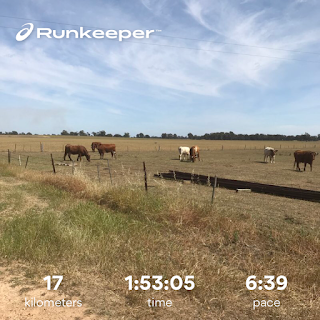 Monday brought its own challenges, and from an unexpected quarter.  Longtime readers will remember a few of the posts I shared about unemployment.  I’ve known a few hard times in my life, but nothing - nothing - was more soul-grinding, more sadistically humiliating than unemployment (and that included working for a certain psycho).  Those memories make this time of year painful for me, because it’s when fruit growers always call for greater access to foreign workers to carry out the harvest.  Why do they want foreign workers? Because they have an obstinate view - almost an article of faith - that Australians won’t do the work and that anyone on welfare is by definition lazy and useless.  This year the Prime Minister has decided to help the growers out by tweaking the visa rules to make it easier for them to hire foreign workers rather than Australians.

Naturally, Joe Public had plenty to say about it:

Hearing myself - and every other poor SOB who has ever had the misfortune to be out of work - spoken of in that manner fills me with an emotion I can’t identify but which is certainly not a positive one.

Being unemployed is hard. Pope Leo XIII’s observation over a century ago still rings true:


Work is a gift. The human person has a right to productive work, a fair wage, private property and economic initiatives. Work enables a person to use gifts, be affirmed and contribute to the common good. Unemployment is the diminishment of a person’s skills, potential, personal confidence and a sense of purpose in life.

There’s a special place in Hell for anyone who goes out of their way to grind the face of the unemployed in the dirt. And if you hear someone threaten someone with unemployment, by saying “if you don’t like how we work here, you know where the door is” when all concerned know that jobs are scarce, then you should know you’re in the presence of a sadist.  If a person forces their worker to knuckle under by threatening them with economics, ask yourself what they will do if given a whip.

Cup Day itself brought a change to the weather and rain in the morning.  There’s no better sound to wake up to than rain running into a water tank.  This made for a slowish start to the day since there was little incentive to be outside save to feed Polly and walk the dog.  I felt a bit guilty, however, as my phone kept beeping with alerts to tell me that Northcote SES’s area was getting smashed by the weather.


That feeling when you’re watching your part of Melbourne getting smashed and you feel kinda #guilty for going up country for the long weekend #SESlife #emergencyservices #shirker
A post shared by Stephen Tuck (@sdtuc2) on Nov 5, 2018 at 4:55pm PST

The rain more-or-less cleared through by midday, letting us get some farm work in before it was time for me to get the train for Melbourne.  The weather must have close in again because I’d not long been on the train when my phone beeped a storm warning. 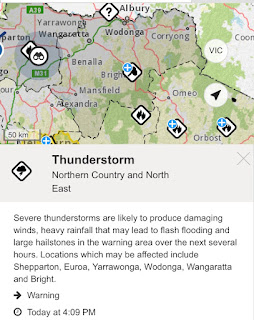 I passed this back to Mum, who explained that at least one of the denizens of the farm was making the best of it: “thunder heavy rain for about 5mins hail. Dog out eating hail stones!”

And now what?  Typing this blogposts took me all of the train ride back to Melbourne.  I’m now on a tram for my digs and should be there by 7:30pm.  Tonight’s plan will be to unpack, go for a gentle 10km run, have a shave and a shower and then watch some TV with dinner.  Bed, hopefully, on the stroke of midnight.

Wherever you’re reading from, I hope you got as much out of your weekend as I have!
Posted by Stephen at 01:37