An accident at Mornington

On Saturday I went for a leisurely wander through the Melbourne General Cemetery.  Any cemetery wander is a history lesson and today was just such a day.  This was the headstone that caught my eye - 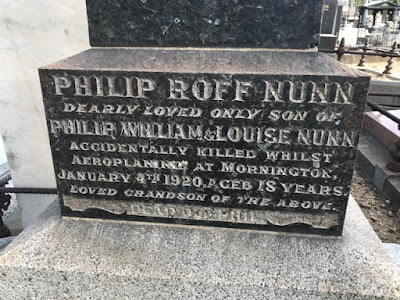 Mr Nunn, as the headstone says, was killed while "aeroplaning" at Mornington (how long, I wonder, was 'to aeroplane' a verb?).  The fuller story, however, is somewhat more tragic.  The report in the Argus (3 January 1920, p.14) stated that he had long been trying to obtain a flight in an aeroplane and had persuaded the pilot in this case to take him on a series of afternoon flights in a Sopwith Gnu (the type of aircraft is identified in a report of the Defence Science and Technology Organization).

As the aircraft approached Mornington it snagged on a telegraph wire and overturned, injuring the pilot and causing Nunn fatal injuries.  Painfully, the Sydney Morning Herald (5 January 1920, p.7) reported that the flight had been taken without his parents' permission.

Nunn was born in about 1902.  The Wright brothers first flight took place in 1903.  It is painful to think that when Mr Nunn's parents received the news, they may have reflected that he was killed by an accident they could not have imagined on the day they welcomed him into the world.
Posted by Stephen at 13:30