This is another post asking what we can learn from emergency preparedness as it was practiced in the past.  Today I'm looking at Fallout Protection, prepared in 1961 by the Office of Civil Defence. 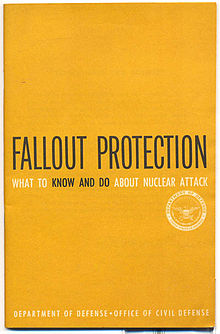 This text is historically interesting for two reasons.  First, it has a rather grimmer and more purposeful style than Surivival Under Atomic Attack, published a decade earlier.  Secondly, governments seem to have had greater faith in people to accept bad news then than they do now: it's difficult to imagine any western government stating bluntly (as this book does at pp.5-6) -

There is no panacea for protection from nuclear attack.  In a major attack upon our country, millions of people would be killed.  There appears to be no practical program that would avoid large-scale loss of life.

The next thing to say is that (viewed from today's perspective) the illustrations in this book are unintentionally rather funny.  Apparently proper clothing for preparing a fallout shelter is a frilly baking apron (p.20), a cardigan (p.24) or skinny jeans (p.23).  And when taking shelter from a nuclear holocaust, remember to wear a necktie or a v-neck sweater (pp.21-22).
Sartorial factors may be the least of your worries though: the shelter designs show a family of three crammed into an area measuring rought 4' x 4' x 10' for up to two weeks.  I suggest that after 24 hours tops, most people will be willing to take their chances in the post-apocalyptic wasteland with Big Brain and Friends.

Image from here
Once one cuts through the comedy, however, there is genuinely good advice for any sort of disaster, nuclear or otherwise.

This guide notes that humans can live on one quart of water (just under a litre) a day, although it will be more comfortable to allow a gallon (just under 4 litres) a day in warm conditions.  It states that even though water may develop a poor smell or taste, it will still be usable in an emergency.
If water contamination is likely (for example, in a flood scenario), a safe water supply can be preserved by closing your house off from the mains.  Water stored in pipes, toilet cisterns and a hot water service will in general be safe to drink.  The book recommends assuming that one will need to purify water from public sources unless advised that it is safe to drink.  Cloudy or unclear water should be strained through a paper towel or multiple thicknesses of clean cloth, or allowed to settle in a deep container before being siphoned off.  After that, it can be freed of germs by being boiled for a few minutes or chemically treated

This guide recommends keeping a two week supply of food.  This seems a prudent measure in any circumstance where one may be isolated as a result of flooding, fire or snowstorm, and is somewhat more realistic than the American Civil Defence Association's recommendation of a year's supply (I would add as an aside that keeping a year's supply of food in a survival situation looks suspiciously like hoarding and or preparing to profiteer, which raises some moral issues).  Ten-thousand calories should be allowed for each adult over two weeks, assuming that they will be fairly inactive.
It is recommended that one selects foods which are familiar, which will make them a morale-booster when one is otherwise stressed (conceivably they would also be more acceptable to children who are upset by the loss of their routine).  Foods that do not require cooking or refrigeration are recommended.  The guide suggests -
Eating the oldest items first is recommended.  Tinned foods should be discarded if there are bubbles in the juices.
The book also says (and I emphatically do not agree!) that bread is still edible when mouldy, that sour milk remains drinkable, and that tinned and packaged animal foods can be eaten by humans without harm.
Posted by Stephen at 07:13