Here at the farm we waste surprisingly little.  In the warmer months, collecting the water from the shower, kitchen sink and washing machine.  Anything edible goes (in the final instance) to the dog.  And anything organic goes into compost.
Recently I've been making a lot of fruit salads, while the fruit is cheap.  It struck me that there might be something more we can do with fruit waste before it's composted.  This married up with my other passion, which is healthy living.  From this came fruit infusions.
By way of example, the other day I was making up a salad out of bananas, kiwifruit and canteloupe (rockmelon).  As you can imagine, this generates a fair bit of peel. 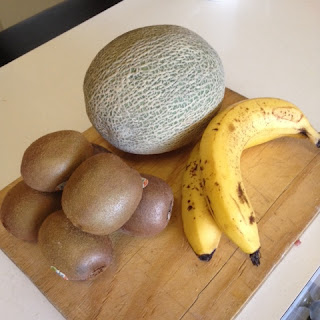 While I was preparing the melon to be cut up, I cut it in half and scraped the pulp from this middle into a plastic bowl.  I also put in the bowl the touch outer rinds and the peeled skins of the kiwifruit. 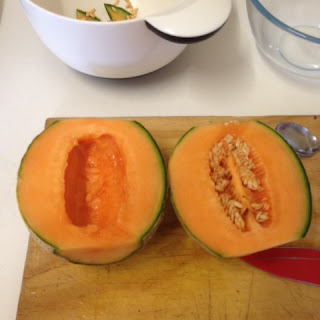 The bananas needed different treatment.  The skins taste revolting, but I couldn't see anything much wrong with the whites inside them.  So, I laid the peels out flat and scraped the edged of the knife along them to remove the white.  This went into the bowl too. 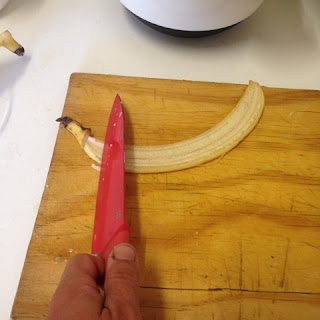 Next, I boiled the kettle and poured the hot water over the mass of pulp, pips and skins and left it to sit while I cut up the salad proper. 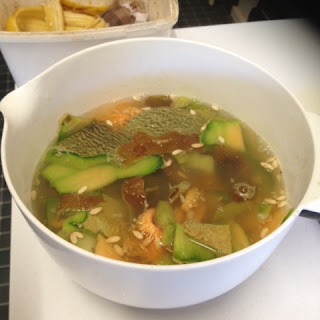 Once I'd finished the salad and put it away, I sieved the solids out of the brewed mix of skins and so on.  The skins and detritus could then go into the compost bin. 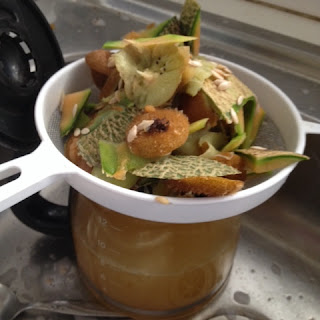 The end result was a pitcher of fruit drink that could be used either as a flavouring for water or as a drink in itself. 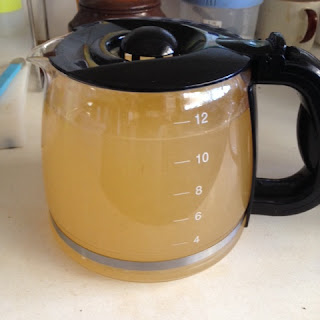 For the avoidance of doubt, wash the fruit before making an infusion with it: this ill remove contaminants from the outside.
Clearly, the results you get doing this will be a little haphazard.  In this case, I'd probably have excluded the melon rinds (they gave it an unpleasantly woody taste).  More often than not, though, you get to extract even more value from fresh fruit, and give youself something more flavoured than water and healthier than soft drinks.
What have you been doing lately to make food go further?
Posted by Stephen at 03:34