Running, a sunset and memories

Hi everyone,
The original draft of this post started with a rather grumpy review of some recent news.  After I'd written the post, though, I was struggling to remember why it seemed so important.  Anyway, I cut it from the post and went straight ito the better bits of today, which were a run and a photograph.

It was a warm day here - 35C/100F - but I wanted a run nevertheless after some bad dietary overindulgence yesterday.  I was only going on a gentle 10kms but frankly  I struggled.  Part of this was the route, which was a large road over mildly hilly terrain.  I chose this in preference to the track out the back of the farm, which I'd have preferred but which is likely to have snakes about at this time of year.

I pursued my usual strategy of forcing myself to the halfway point and then finishing however I could.  Getting to the halfway mark at least forces me to get the target distance even if the pace is lousy.  In the event I managed to go about 6 kms before I had to slow to a walk.  I think I walked about half a kilometre or so before I stopped, stretched and then got into a slogging, slow run the rest of the way back.  As I said, this was a run that was a bit of a struggle.


I should say that one of the advantages of living where I do on the backroads is that I can run shirtless if I so desire.  I was certainly doing that today.  It's a great feeling - the cool air on your skin and the sun on your shoulders (I was actually probably lucky I didn't get burnt).  I can also say that you feel 100% more badass that way, even if your pale skin makes you look like Frosty the Snowman!  I don't think I'll try running naked though: that has 'unfortunate photo in the newspaper written all over it).
The day closed with a great little moment inspired by my friend Melissa, with whom I worked four jobs ago.  She shared to instagram a picture of the sunset over Port Philip Bay in Melbourne that is just stunning.  I don't miss Melbourne very often.  I don't think I could ever move back there: too many memories, especially in the south-east where the ex and I lived.  But I do miss the sunsets over the Bay in summer. 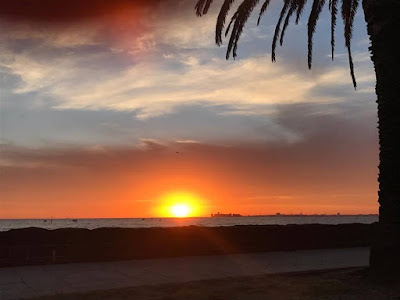 
Isn't it incredible what memories an image can bring back?   love the memory I have of eating fish and chips and drinking a beer on the Middle Brighton Pier and watching sunsets like these on a Friday evening.
Sometimes heaven seems very close indeed.
Posted by Stephen at 04:37