Yesterday saw an unusual exercise on the farm: snake fishing!

No, this isn't a fancy name for catching eels.  Nor a strange local custom.  On the farm our main source of water is what falls from the sky.  However, when the warmer months come we supplement this with water pumped from two shallow and old brick-lined wells. 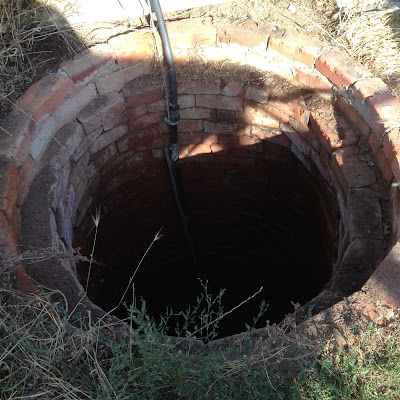 The inherent problem with wells is that animals go into them for shade and water, but usually can't get out (even when they're covered with a concrete slab, it has a gap to allow the suction pipe to go in).  The old boy had been down at one of the wells when he noticed something animal-like bobbing on the surface (his guess was a drowned rabbit).  As this water potentially goes into the water we drink (i.e. if we get really desperate) and is part of the water the cattle get, the object had to come out.  So he, I and former-brother-in-law went to remove it with a length of rope tied on to a bucket with holes drilled in it and a half-brick for weight.

The first thing former-bro-in-law and I twigged was that it wasn't a drowned rabbit but a snake.  Secondly, it still seemed to be alive: it was moving quite a bit as we tried to coax it into the bucket on the right angle to lift it out  We could get the head into the bucket - that was fine - but it then moved out again as we moved the bucket up.  Dammit!

I should say that we hadn't counted on the extra weight of water in the bucket. When we went to pull it up the first time, the first thing that happened was that the handle snapped.  There was a delay of about an hour while we tried to lasso the (miraculously) still-floating bucket and then fashioned for it a hook out of fence wire.

We kept working at it until just the right angle presented itself and we pulled up the bucket with the snake on board.  He was motionless, and apparently dead.  I was pleased about that: we had no plan for dealing with an angry snake once he was on terra firma! 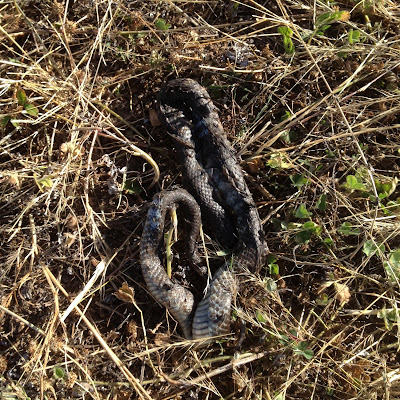 It turned out he was a small tiger snake, just under two feet long.  I have no idea how long he'd been down there.  Long enough to start decaying judging by the smell, but not long enough that he began falling to bits.  I'm certainly happier knowing he's not rotting away in the water either man or beast will be drinking!