A foray into dating

Last Tuesday was a curious sort of day.  It started out with an agitated phone call from FBIL at 0730. He was at Mum and Dad’s, and was terribly alarmed at how short the water supply is getting and whether it’ll be necessary to have him, Barry and me up there on a roster to help Dad cart water. This isn’t such a bad idea, although it’s hard to know if the situation was actually more dire now than it was when I had been up there 8 days earlier.  FBIL does tend to catastrophise.

Farm worries aside, I was feeling good as the day got underway.  To my own moderate surprise I had a flash of courage and asked someone if they’d like to Go Out on Friday evening.  To my much greater surprise the person in question agreed.  Yes, I know this made a lie out of my many “single by choice” posts, and yet I kind of want to explore that side of life.  The date in question fell through a few hours later due to sudden other plans by the lady in question.  Maybe she was on the level; maybe it was a polite way out.  I suspect the latter, but in any case one can't sulk: there's nothing worthy in pursuing a lady who does not wish to be pursued.

It got me thinking, however, that it might be good to try.  After all: if it worked for the old guy in the Coke ad, why not?  I'll believe anything that's endorsed by a major corporation.


Anyway, I paid some money to the operator of a certain app, and also reinvigorated my profile on another faith-based app.  The results were ... well ... disappointing.  From the first - 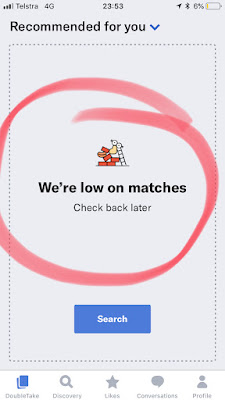 Now, possibly my standards are too inflexible (there was a lot of swiping left).  Or possibly I'm not made for this world in its more secular orientation.  That's plausible, right?  This lead me to the second option, which was church-based.  This had a desirable quality of being up-front about the lay of the land: 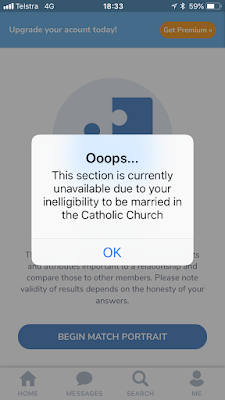 All of which leaves me here with about 20 days to run on a fairly useless subscription of which I've now stopped the renewal.

I'm not quite sure what to make of this exercise, save perhaps to be grateful the universe cut to the chase.  The world is still full of other and better experiences than dates; I'd better go out and explore a few more of them!
Posted by Stephen at 02:50