From having been eWOL

Hi everyone,
Posting this from my office at lunch hour. Sorry for being eWOL for so long. I've been trying to write a catch up post, with limited success.
Anyway, overall things have been good the last week or so, save only for the issues currently going on in my life. And even they aren't so bad; just unsettling. Although, a big whack of my life has involved being excessively settled, so there is something to be said for the "stone in a rock tumbler" aspect of the whole experience.
It was my 35th birthday last week, which means I'm halfway through my allotted three score years and ten. It was a little curious this year: usually I sort of try to let my birthday go by unmentioned.  This year, I didn't make a big deal of it, but I felt calmer and, I guess, more joyful than I have in quite some time. One can overanalyse feelings, and I'll resist doing that now. Suffice to say I was really touched when my assistant got me a birthday cupcake from the bakery next to our office! 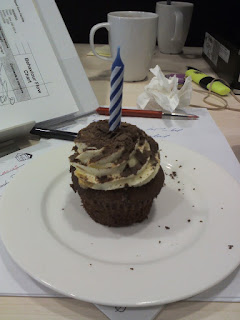 As you know, I've been spending a lot of time at the weekend with the parentals at Shepparton. It's calving time for the heifers there, and already there's one calf that's being bottle fed.  When I was up there the weekend before last Dad did find himself having to pull a calf from a heifer in trouble.  This, incidentally, was something we all saw quite a bit of as kids: look no further for the reason none of my sisters have children!
The Saturday of that weekend was a Beef Week event at the property of a couple of friends of the parentals who are Maine-Anjou breeders. This coincided with the AGM of the Maine-Anjou breeders society.  It was great to see how happy Mum and Dad seem to be with all the new friends they've made through the breeders' society - It really makes me glad to see them happy.  Added to which, the AGM was accompanied by a first class lunch of roast, grilled and corned beef from the breed in question. Great reason to break the diet! 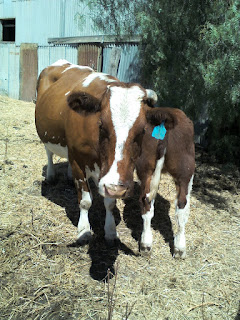 Stopped in Rushworth on the way going there - 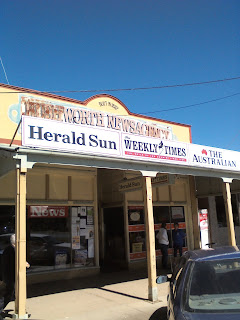 which allowed me to get my newspaper fix with the Shepparton News and the Kyabram Free Press.
On the way back, we swung past the block at Rushworth to pick up a trough which had been earmarked for giving the cattle at Shepparton a mineral supplement in the form of rock salt and molasses.  Clearly cattle like the whole "salty and sweet" thing. I must try giving them Reeses peanut butter cups one day. 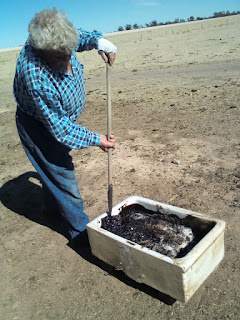 Work is kind of problematic: I feel pretty guilty over how many headaches I'm causing for the gentle, kindly, supportive folks I work with, and yesterday that sent me into an absolute tail spin of self-loathing and guilt and upset. Suffice it to say the Nikes got a workout last night that had nothing at all to do with fitness and a LOT to do with clearing my head.  A lot of the closest friends came running (well, posting) when I alluded to this on Facebook, and that was a true feel-better moment too!
At the weekend I was had Sunday lunch at Second Oldest Sister's place, and she made surely the mother of all birthday cakes: the pictures (which I'm having trouble posting but will put up after) don't at all do it justice!
Saturday of the weekend I'd earmarked as time to write - 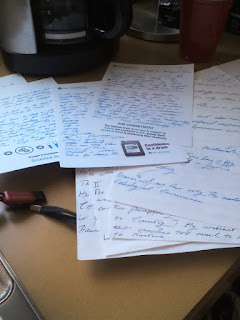 look for a job, and go for a LONG run. Sucessfully did all of those things. For the run I went down to St Kilda late afternoon and went running along the Esplanade. Beautiful sunset (snapped from phone while literally running!) - 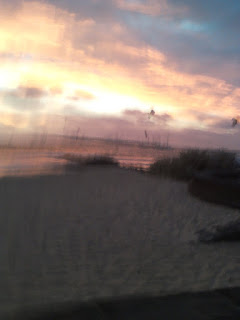 although I looked less stellar after two hours and 19kms! 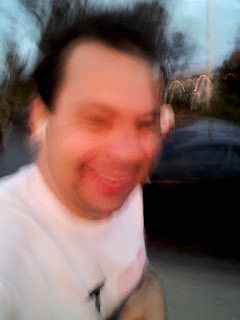 I got the tram back from in front of Luna Park. 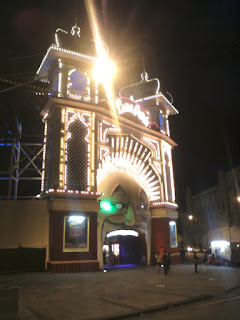 Skyped with Grace and Rachel Saturday evening. As always, a very bittersweet experience.  Well, at least I know they're clearly growing up to be beautiful little people.
I was as stunned as the rest of the world by the Pope's decision yesterday to step down.  Oddly, the last pope to step down (voluntarily) was St Celestine V, for whom I took my confirmation name.  I know I should be poring over the news reports, but somehow I'm not keen.  So many people, especially in the online comments, seem to hate the Pope, the church, and often Catholic en masse, with a venom it's hard to credit.  Do I want to wade through it?  Not especially.  So many people seem to have so little to say, and to say it so often and so loudly.
OK, I guess that's a catch up.  I'll post again tonight, I expect.  Sorry again for being away so long!
Posted by Stephen at 05:32