Sorry I haven't been much talking about my adventures in orange lately.  Bizarre, right, considering what a large whack of my life it is!

Well, first up, last weekend we had the second half of the Road Crash Rescue course.  The people from the Tatura unit went down well prepared: we'd all been getting into the theory questions (you would have seen the ones I drew up posted here for each of the relevant chapters).  The more experienced members had also helped us out by supervising some extra RCR training at the unit in the week beforehand.  One evening we spent getting the nearside doors off of a wrecked car - 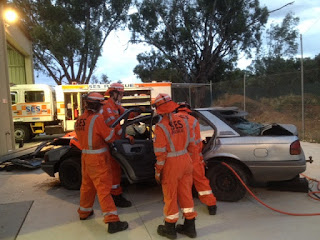 The other evening we did some further cuts and competed a forward roof flap.  I think our only real weakness was being really focussed on doing it right, so there was quite a bit of discussion before anything was undertaken. 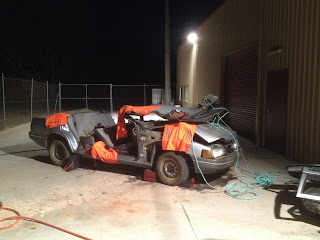 Be that as it may, we went down well prepared fore the second weekend.  Both days were formidably hot, especially as everybody was wearing full PPC/E.  One the second day I got an object lesson in the quality of German engineering when my group was tasked with getting the doors off a Mercedes Benz and rolling the dash.  I can tell you those hinges didn't break easily! 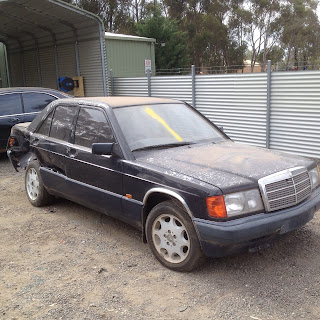 I'm afraid I don't have any photos from the assessment itself.  I passed, but I wasn't rapt by my performance:  Too much discussion and disagreement about how to get the set tasks done, and not acting as one should do on a crash site.  On the other hand, the next day was a bit restorative when I found myself part of the three-man crew going out to this accident.  This crew consisted of one experienced member and one member who had been on the road crash course with me the previous day.  I'm proud to say we performed well: we barely needed to even speak to each other to stabilise the car, get sharps protection in place, and work with the crewleader to get the driver's door off and assist the ambulance officers to get her out.  We did our work well.

There was some humour when we got back to the shed and it was noticed that in my haste to change out of my suit and into my overalls I'd left my tie dangling over the wing mirror of one of the other vehicles.  People asked if someone had been with a lady in there! 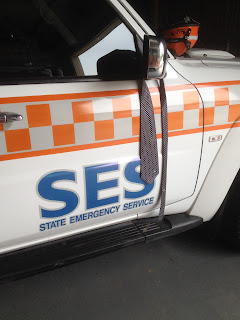 Yesterday some of us from various SES units went down to Kilmore to do storm-safety awareness with officers from the Country Fire Authority, who were doing fire awareness.  Happily, the Unit loaned me some wheels for the day - 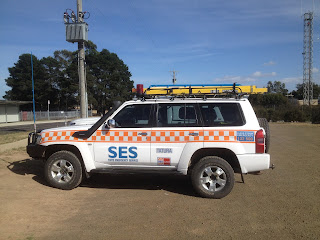 I was interested to find that Black Saturday casts quite a long shadow.  There were quite a few people who hadn't turned their minds to what they'd do in the event of a fire, but there were many who had already decided whether they would stay and fight the fire (and were tooled up to do it) or woud evacuate.  Of the latter, only a couple had emergency kits prepared, but most assured us they were able to get out of the area at the drop of a hat.  Everyone knew how to locate fire danger ratings. 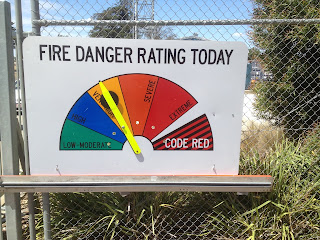 Interestingly, none of them had boiled their fire plan down to "call the CFA and leave it at that".  There seemed genuine awareness that the authorities may be too overstretched to help in a major fire event. 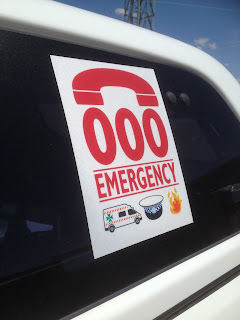 I was going around the houses with a CFA member, and each of us explained to householders what we needed to.  As we were in his vehicle, I had a chance to listen to the CFA radio chatter.  The impression I get is that SES's training is probably more technical than CFA's, and we can be asked to do a wider range of things, but that you could never accuse the firies of being slackers.  The chatter on the radio was almost constant and I got the impression that in the fire season they don't get much time to rest.  I'm certainly glad they're there. 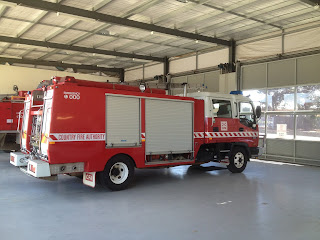 No more to add for now.  I think that's got you caught up.  Normal service should be resumed tomorrow!
Posted by Stephen at 10:30