Are preppers a help or a hindrance to civil defence?

I've written elsewhere about the need for well organised civil defence as a means of responding to the threat of terrorism.  Upping the stakes to (say) an Electro-Magnetic Pulse attack or a major hurricane, rather than a straightforward mass casualty event, what would happen? 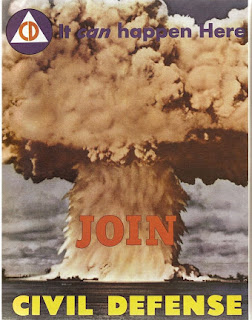 On one hand, preppers will be physically and psychologically ready for a major disaster.  They can be expected to be self-reliant and not require rescue.  It's also not easy to imagine them hampering rescue and relief crews.

On the other hand, prepper thinking regularly assumes that society as a whole will fail.  That governance will cease to exist in a real sense, and that neither public nor private relief efforts will be effective.  This seems to me an attitude which has accepts defeat on a number of fronts.  The energy which so many skilled and motivated people put into securing the survival of themselves and of small groups could achieve much more if it were applied to saving communities, towns, and cities.

What do you think?  Is prepper-hood a bonus for disaster preparedness?  Or a potential problem?
Posted by Stephen at 05:00