Finally writing an update on the last few days.  It's been an orange Christmas here.  Why orange?  We've had callouts over each of the last few days, and I think I've been doing my bit for emergency readiness in Victoria.

This day was a quiet at work although there was indeed a callout - a bunch of tiles missing from a roof in Shepparton.  My SES unit was mobilised along with the Shepparton emergency unit.  It wasn't the easiest place to get a roofline set up (it was a big roof!) and it was my job to go up to do the repairs.  It wasn't the greatest material to work with: the tiles had been laid pretty loosely and getting them to bed down securely wasn't easy. I think it was pretty sound by the time we left, and I'm pleased about that.

I was at work this day, and at about 10am there was a callout for a road accident at Harston: a vehicle rollover.  The vehicle was totalled, but I think the driver will be OK, save that for a few weeks he'll feel like he went ten rounds with a header.  It was a good turn-out by our unit, and the accident was also attended by the CFA, police and ambulance service.

Image from here
Headers: Not a bad analogy for how a casualty feels.

Last day of work, although there wasn't a huge amount of work to do.  I had a letter to draft in a matter that involved digging into the Water Act 1989 and the Forests Act 1958.  It was an interesting exercise, but done by 11:30.  I killed time until eventually I pulled the pin at about 3:30pm and left.  I headed down to Murchison: I hadn't been for a run in ages and I decided to bust out some miles on the rail trail.  I'd previously gone to the end of the 'marked' trail, but I was feeling good and so I decided to keep going on the bush track beyond.  I went to what I thought would be a good turnaround point, whereupon I went off the bush track and ran on the rail-line itself back towards Murchison. 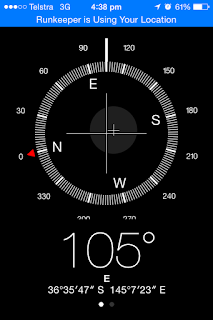 This was the point where I turned around.
Intriguingly, the former rail line actually became quite easy to spot out in the timber beyond where the trail itself ended.  The embankment and the cuttings were both very clear to see.  My instinct is that the remains of the line probably go most of the way to Rushworth.  When I have a day spare, it might be a good adventure to either run or cycle. 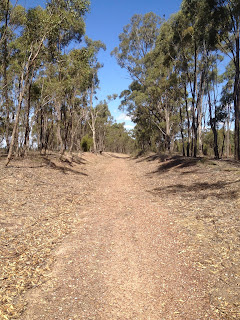 That evening I read for a bit and by about 1am I was just settling down to sleep when the pager went off with a priority one job: a person had been injured and (in effect) trapped in part of a building.  I hotfooted it into Shepparton and met the other members of my unit, although there wasn't a great deal for us to do aside from a little traffic control: another (closer) unit had also been mobilised and had extricated the casualty by the time we were on scene.  Again, no details and no pack drill, but I can say confidently the casualty would have been very sore the next day.  I was home and in bed by about 2:30am.

I slept late with no guilt on Christmas Day.  Little Sister had come up the previous night while I was out at that job and it was good to see her.  It was another hot day and a lot of the time was spent simply lying low and avoiding the heat.  As I've said before, Christmas Day is kept fairly quiet in my family, given that the older sisters spend the day with the families of the Nik and JP.  The best bit of the day for me was skyping with Grace and Rachel.  They'd just come back from Christmas eve Mass, and the Ex had arranged for them to open the presents I'd sent them from Amazon then (the ones I posted from here are stuck in Chicago).  Lordy but they were excited and so thrilled to see their Daddy.  They loved the Swarovski ornaments and were thrilled by the Mousetrap game, and also by the idea of playing Scrabble.  And the Ken and Skipper dolls absolutely hit the spot.  They love me hugely, and I love them the same.  I'm so proud to be their Daddy.

Oldest Sister Economist and Nik arrived down at the farm at about 9pm. They're both doing well and it was great to see them.  We were just having a cup of tea when the pager rang with another priority-one job.  This time it was a person trapped in a motel spa!  So, on went the orange overalls and off I went again.  This time an ambulance, a couple of fire trucks, and two emergency service units (including us) had been mobilised.  It turned out it was a lady who was trapped, rather than a man as originally advised, and so all but one of the fire crews was sent home: the poor woman's dignity was being trashed enough by being seen in that position by the firies without a bunch of extra people being involved.

Today I woke up to the most beautiful sound of all: gentle rain, and the sound of water flowing into a tank.  I stretched out and enjoyed the sound of rain and the cool air until (you guessed it) another page came through, this time for a leaking roof in Tatura.  While I was waiting for the duty officer to advise whether a crew was going to have to attend, I got up and got dressed.  I made some breakfast and poured coffee.  I'd just started eating when the message from the duty officer came though asking for people to attend.  Yep, I oranged-up and headed over to Tatura.  I'm not gonna lie: I was happy to be going to the job.  Not because I wanted to escape my family, but because it was great to get out and do something with my other family.  The problem with the roof turned out to be a displaced tile, and so we set up the safety line, and it was agreed that I'd go up on the roof to fix it.  The fix itself took only a minute to do, and I nudged a couple of other iffy looking tiles back into place while I was up there.

Oldest Sister Economist had asked me to pick up some ointment from the vet in Tatura, which I did.  I got back to the farm about 10:30am, just as Uncle Greg and Jacquie were arriving.  This was less than ideal: while I was very happy to see them, I'd said I'd have a turkey fried by 12:30pm.  I was going to have to work flat-out to make it happen, and this wasn't easy with people wanting to talk Christmas cheer and with a couple of small children tearing about.  I'm afraid that I must have seemed rather rude and abrupt as I injected the marinade and coated the turkey in seasoning.  While I was doing that, Dad set up the frying rig and I started getting the oil hot.  Frying the bird was a hair-raising exercise: it was a 7 kilo (15.4lb) bird in a small pot, with the oil about half an inch from overflowing. 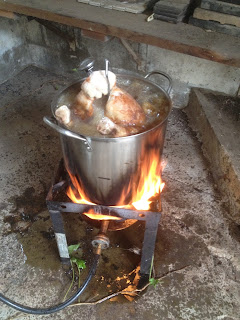 I kept needing to adjust the temperature to keep the oil as hot as possible without making it boil over: oil boiling over onto a gas flame tends to ignite.  Sometimes it just means a few big licks of flame.  Sometimes it means the pot goes thermonuclear:

Watch this video - trust me, it's worth it!

I had only one genuinely hair-raising moment, when there were some big slops of oil down onto the flame: a couple of sheets of fire threatened to ignite the pot itself but fortunately didn't.  It was at that moment that I realised I didn't have any access to an extinguisher that would work on cooking oil fires.  I decided there and then that if it ignited, I was going to back away and leave it to burn.  Despite all of this, after an hour it was done and was as good as ever.  Definite win for me! 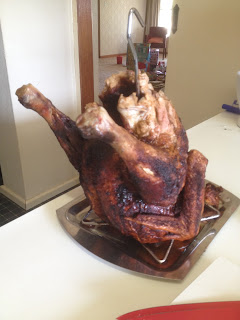 A little after the turkey was finished, Second Oldest Sister and JP arrived, with the avalanche of food that S.O.S. loves to cook.  They brought the base for the plastic Christmas tree, and JP and I supervised as my uncle's kids decorated it.  It was lovely to see that my little cousin Felicity had insisted on wearing her "Princess Ana" costume.  It made me think of my own girls and how much they loved Frozen - Grace especially loved Queen Elsa, and so I smiled when Felicity said that her favourite song from the movie was 'Let it go'. 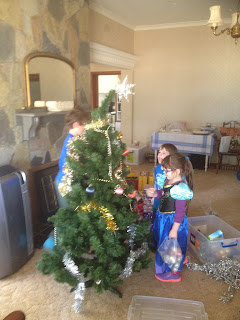 The day itself passed off well.  Lunch went with no great awkwardness or difficult moments which was a huge relief.  At the insistence of the little cousins, presents were opened after lunch.  I hope the presents I gave were good enough: I always worry about that.  I know it's the thought that counts, but I'd hate people to suppose that my thoughts were "how can I make as little effort as possible?".

The afternoon passed off well as we digested lunch and talked and played with Greg's kids.  I took the dog for a walk down to the dam and took the kids with me which they liked (in hindsight, it was probably a bit too far on little legs - whoops).

A bit before sundown, Greg's family headed off and Second Oldest Sister and JP got on the road for Melbourne.  Most of us grazed on leftovers for dinner and I started writing this update.  It felt great to stretch out in bed and start to digest. If the pager went off, I wasn't getting out of bed for anything less urgent than nuclear war!

I have to say, I felt a lot less stuffed when I got up this morning.  Dad and former-brother-in-law were keen to head down to the Peninsula for today and tomorrow in the truck, so that means that I'll be up here.  Fine with me: I do rather want a long run.  The weather is sunny and mild, and hopefully the pager stays quiet.

Not much more to note.  All being well I'll write a bit more later today.  I hope everything is going well with you!
Posted by Stephen at 20:11